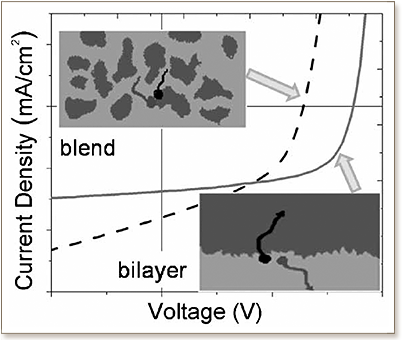 We investigate solar cells comprised of a vinazene derivative (HV-BT) as the electron acceptor and the well-known polymer poly(3-hexylthiophene) as the electron donor. In the as-prepared blend, most of the excited state species, including the excimers on HV-BT, are quenched at the heterojunction. Although the photophysical properties of the blends change upon annealing, the blend solar cells largely remain uninfluenced by such treatments. A significant improvement is, however, observed when inducing phase separation at a longer length scale, for example, in solutionprocessed bilayer devices. Hereby, both the fill factor (FF) and the open circuit voltage are considerably increased, pointing to the importance of the heterojunction topology and the layer composition at the charge extracting contacts. An optimized device exhibits a power conversion efficiency of close to 1%.