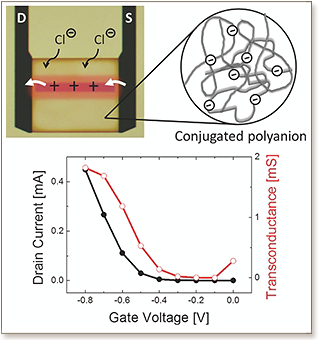 ​An organic electrochemical transistor operating in accumulation mode with high transconductance was reported. The channel comprised a thiophene-based conjugated polyelectrolyte which was p- type doped by anions supplied from a liquid electrolyte upon the application of a gate voltage. The penetration of ions into the bulk of the conjugated network and the subsequent polaron formation were monitored from the increase in the current flowing through the channel and from changes in its optical absorption spectrum. It was found that the use of EG as a co-solvent improved not only the transconductance, but also the response time of the transistors. Films cast from EG-containing solutions exhibited an ordered morphology accounting for improved hole transport. The improved temporal response was, on the other hand, attributed to faster transport of ions, which was correlated with enhanced swelling of the film. Relating the drop in vibration frequency in response to water uptake to the increase in thickness, it is found that the EG-treated films swell 20% more than the pristine films.